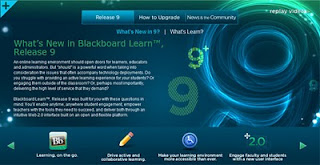 Sometimes, when you least expect it, technology actually works. Too busy to drive to the ASU Tempe campus for the Blackboard Course Administrators Fall 2010 startup meeting, but the technology walked its talk this time by making session available via Adobe Connect. We have this virtual meeting software available as a site license here at ASU for just these multi-campus events, and we hardly ever use it for IT gatherings. It would be like the beautician having nice hair or the plumber having time to fix her own leaky faucet.

But use it we did and had a great session, reviewing the full-scale implementation of BB Learn/9 here, as well as the full-scale release of hosting BB off-site at Blackboard. Fingers crossed, wish us luck.

Here's some information that instructors will find useful as we move forward:
The name: BB Learn/9. It's version 9, the one after 8, but stylish people are calling it Learn to mitigate reality that it's still just a course management system, not a learning environment. A rose is a rose, but feel free to call it an orchid.

BB9looks very different, and some helpful navigation to the new look has been provided by UTO at What's New in BB 9.

For support files once we get past new features and BB9 startup, the official BB 9 Guide site is also online.

Reminder: If you haven’t requested your Fall courses, the ‘Blackboard Course Request’link is at my.asu.edu and right now, courses are being created within hours. This will slow to a day or so at the beginning of the semester, when requests are in the 1,000s.

If you prefer live encounters when seeking help, I’ll be in my office (UCent 413) all day August 19-20, reserving the time for BB support, questions, and sharing ideas. Stop by/call/Skype/Google chat/or Tweet me!

Have a great semester!
Posted by colleen at 12:08 PM No comments:

As a new semester approaches, some of my favorite faculty are still making claim that they are so good at teaching, they don't need to use technology. Ironically, some are making this claim on a FaceBook conversation I've been following. FB posts are much too short for me to join in with much hope of changing minds, but I'm weighing in here not on 'technology' but on serving our learners. 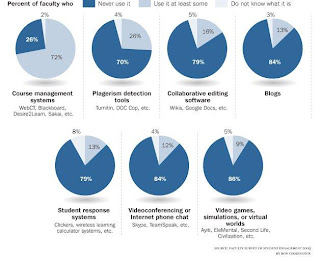 Perhaps it is true that F2F, low-tech faculty can be very good at years of practiced lecture, buuuuuttttt....there is so much evidence that today's students aren't like the faculty, aren't oral learners, don't learn enough from being lectured at, and that one would hope that change, despite being painful, could still be possible if we note that they are not us. Today's students are often here because they need to be here. They don't love school, they just want the opportunity to climb into the middle class and increasing evidence (like the recently released Tough Choices, Tough Times) says that we now need higher education to get us there.

Michael Wesch tells a story of asking his lower-division students to raise their hands if they liked their classes. Only a few tentatively did. He then asked how many of them liked to learn. They all raised their hands.

There is only so much institutional support services can do to make it easier for "non-traditional" students (now the majority) to succeed. There has to be some effort made it the classroom but ...what? It's hard? Tenure says you don't have to change? Research time is more important than learning to change? Students are captive, submissive, 'tell me what to do to get out of here' voices with no power to ask for change? What stops faculty from making the effort?

A friend of mine uses analogy of the medical community, saying doctors refused to listen to a call for change. And then the HMOs came in and changed them. If society can come for MDs in the morning, you can bet they'll be at our doors by night.
They're here. In the form of for-profits, government commissions, outraged calls for accountability, budget cuts, and increasing evidence that we're not graduating prepared citizens.

Common wisdom (ok, my therapist) says that 'we don't change until the pain of change becomes less than the pain of staying the same'. I'm thinking we're close to that change point.

If you have ideas on how to get there from here, the Next Generation Learning Challenges Initiative will soon be releasing their RFPs to support projects that reach out to NG students with NG ideas and technologies. No pain, no gain.
Posted by colleen at 2:54 PM No comments: