One of the culture shocks experienced while offering workshops to Chinese students at Sias International University was the silence out there. They didn't ask questions. They didn't want to answer questions when asked. Turns out they didn't want to embarrass ME in case I didn't know the answer. I explained that American professors are comfortable not knowing the answer, and we encourage questions.

Now, I'm thinking, I didn't quite tell the truth. OK, I hope that I told a theoretical truth, but in practice, we know we're generally asking the few, eager, extroverted, usually attention-seeking students in the front rows. We know their questions and we know our answers. What if we really did want students in the back rows to let us know what they don't understand? There are new and interesting ways to ask them, even in large lectures and I'd like to think aloud about a few of them.

First, the infamous "clickers" or more formally "classroom response systems" (CRS). Clickers can be a great way to get low-stake feedback. For those new to these hand-held gadgets, here's Wired's take on the subject. But, the classroom setup and the individual devices can be both pricey and hard to manage. Too often purchased by the students and poorly used by the instructor, the cost and cumbersome management can cause some resentment.

Some say the is not the pedagogy, and all we really need is fingers or paper. Anyone who knows me would predict that I'd easily agree with first statement, but think the absence of anonymity in public voting with fingers means you sacrifice honest and unworried responses. There is great value in digital voting, especially when used to "talk back", to tell me what was understood, to share confusion and give me a chance to see where I got it wrong in teaching. For that, I love all the instant voting/digital tools. And if the voting can leverage gadgets already in the students' pockets? Bonus.

So I want to mention PollEverywhere, which is a great alternative to clickers. Web-based, it allows students to respond to questions via whatever they have: phone text, , Web page. It allows us to leverage what our students carry AND ask them what is not known. I like the low stakes entry, as the software offers free polling when asking for less than 30 responses. Instructors can test in small courses or in doing group work, and if you love it, ask your director/dean/CIO to purchase a site license for unlimited responses. It changes the large lecture experience.

Another way in to the participatory learner is to use via SAP's interactive PowerPoint . Ask students to create a account and send you Tweets that are compiled dynamically right in your PowerPoint presentation. I love this plugin, and have found it invaluable in teaching and in presentation settings where I know a number of people would otherwise be zoning out.

It occurs to me that "blended learning" could also be used to describe a F2F class that logs into webinar software (Adobe Connect, WebEx, GoToMeeting, ... you choose) and make use of the chat, poll, discussion notes feature of real-time participation.

Lots of choices. We'd be using them if we really want to "know that our students know what we need them to know" (Tom D'Angelo). All of them would tell us. If we asked the right questions. In the right way for our increasingly diverse learners. Assessment amplified, and delivered via a plethora of software and devices now found in our pockets, backpacks, app-ready devices. 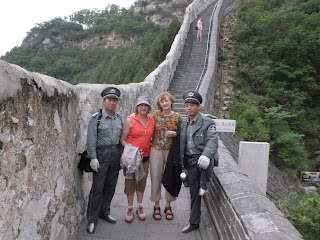 Not a standard topic for Grid Knowledge, but I did go for a symposium on creating positive change, so I'm making the leap that anyone interested in emerging trends will be fascinated by the sites, smells, sounds and solutions now seen in the world's new super-power.

Amazing, astounding, breath-taking. A new China. It was an enchanting trip, better told with 100 pictures than 1,000 words so here's my Picassa sets semi-sorted and labelled:

Now the words, for there are so many stories and so much learned:
At Sias International University (site of the WAFW symposium), I saw college students studying from 6am til 11pm. At Xi'an, I saw a city weaving it's place as ancient city with a new focus on industry.

In Beijing, I saw a city reinventing itself overnight. Light rail anywhere you might want to go, installed in a few short years. (In Phoenix, we fight for years to run one short line and still quibble over the value of public transportation in a West owned by the wealthiest drivers.) Beijing was Ming's Tomb and the Forbidden City; the Summer Palace and lessons from Dr. Tea. It was the crazy, all-night "walking street" of food and trinkets and treasures. It was elegant meals and live centipedes eaten on a stick. It was breath-taking.

In Shanghai, oh the sites and sounds and smells and markets and gardens. They say Beijing is China's DC and Shanghai is the mainland's New York City. I suppose that's right. It was exciting from early morning till I couldn't keep my eyes open at night. It was Old Town Shanghai and endless skyscrapers; the public gardens and the crowded, colorful markets; it was high culture and all-night massage shops. It was a shopper's dream, and although I am NOT a shopper, I couldn't resist visiting the beautiful pearl and silk markets and the not-legal designer back alley stores. I loved it all, spent too much, ate almost everything (rank, "stinky tofu", yes; live centipedes on sticks...no). It was my favorite city because I was there with my friend Elena Zee, where she was raised and her family showed me more kindness than I deserved. Plus, I got my colleague and symposium travel partner/pal, Kathy Puckett, to come with me - so even the travel from Beijing (including missed connections and 24-hr layovers) was a lifetime memory of fun.

I can't begin to describe how little I understood what Fareed Zakaria speaks of when he writes about "Post American World 2.0" until I saw China with my own eyes. There, children in kindergarten are learning English. The government is moving to create a strong, modern infrastructure. The people have a hope, energy and enthusiasm about the future that the USA seems to have surrendered to bickering and internal discord. There is excitement in the streets and people do their best or "eat bitter" without complaint, working to create something new.
I want that for my people as well. I want that for students at ASU. I want that love of the future to exist in me.
Not that it was all good. Many believe it's moving too fast, and there are consequences to ignoring problems with environment, growth, relocation, and the taste of capitalism becoming a hunger incompatible with a firm, Communist government. There's also Tibet, Mongolia and the Western China regions beginning to raise up and ask for recognition of identity. We don't hear much about this, and the Chinese hear less, but it's happening. Because the 21st Century is a new time and a new story for China.

It went by too fast: I saw so much, learned so much, have already forgotten too much. I have to go back, and travel that massive landscape more slowly. Till then, my memories are recorded in piles of digital shapes and colors up at Picassa. They're only a poor simulcra of my experiences over 17 days, 5 cities...but it's a start.

Posted by colleen at 3:15 PM No comments: