I've decided that the late-emerging theme of 2012 here at GridKnowledge is wicked problems (see Rittel and Melvin 1972, and Conkel 2005 or heck, just go to Wikipedia). It's what we have  in higher education (HE) as we drag ourselves into the digital age. Problems that are:
tough to understand let alone solve, dynamic/shifting/elusive, no stopping rules, lots of possible paths to solution.

Another type of wicked comes in the resistance to change we're seeing in so many stakeholders who just want the world to stay the way it was just moments ago. And maybe I should add a third wicked: a new generation of learners (choose your pocket: X,Y,Z, D+, or iGen) that will not have the skills to face the next 15-20 jobs they'll do when they leave the halls of the Academy.

Here, we like to pretend younger learners already "get it" so that we don't have to incorporate technology in our 200-year-old lecture format, but as a technology researcher and an instructor, I can tell you that they don't get it. Sure they FB and FourSquare, 18% of them now Twitter, and they love gadgets. They text and they upload pics taken with their cell phone. Many do so inappropriately and publicly. Many have no idea how to use these digital skills in academic or professional ways. Many don't have the digital problem-solving skills to tackle new technologies and they become frustrated when I ask them to use a new tool. This does not bode well for them when they graduate.

I see most of my colleagues abdicating  responsibility for this lack of preparation in basic  digital literacy. We didn't learn, why should our students? We foster fear and resistance in non-technical students by creating a rigorous hold-the-line defense against technology change or innovation. "It makes it harder for them to learn MY material."

I daily fight processes, policies and people in attempt to infuse needed and exemplary technology into the curriculum. It wears me out, this triple wicked threat to the success of our learners. Some days, I feel that without a supportive and dedicated community of practice out on the Inter-tubes (shout out to: eLearning Guild, WCET,  and NMC) and a boss who will not be deflected from her course, I would call it quits. Other days, the sheer force, speed and power of technology to make learning more accessible, flexible, engaging and affordable sweeps me along as I cry for change.

Often, I forget to look up at a bigger picture of progress as I work day by day, course by course, tool by tool, instructor by instructor, learner by learner. Perhaps big ideas never really solved big problems until a tipping point of one-to one-resistance? So please: resist and promote and cry out! Here's my yelps of the month. I'm sending them out into the digital dark right before our national elections. Hope someone is listening and like a fire fighter's response line, passing the bucket hand to hand until it reaches the fire.


Vote for a future where we're not afraid of wicked, wicked, wicked problems.
I'm Colleen Carmean and I approved this public service announcement.
Posted by colleen at 1:07 PM 2 comments:

Let's think through the skinny on QR Codes 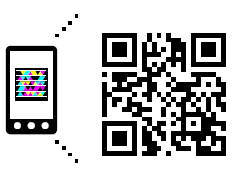 Quick Response (QR) codes. OK, they're convenient. You see them everywhere now, if you're looking. If you're not looking, you don't notice them or you're so immune to over-information that you don't care. And isn't that the way and isn't that just perfect? Quick for mobile folks with smart phones and no time to type long addresses on tiny keyboards; just a tiny bit of ignorable black ink for the digitally-adverse.

Brilliant mobile app for a generation that seeks information on the go, when they need it, where they need it. How does it work? We want more information, we find the QR code somewhere on the page or site or billboard or pamphlet or wall, we point our phone and we're online. No surprise that you never see them in higher education, even though we're ground zero of endless information delivery.

What we are NOT is aware of technology, convenience, mobility, ease of use, or information design. It's why most of our Learning Management Systems still look like the 19th century classroom: the instructor controls the announcements, discussions, assignments, and exams. The students throw themselves into the flow of the information and hope for the best.

But what if...? (I love that question!) What if we took the simple step of creating QR codes for material we want our learners to access in the near moment and we made it so quick and easy for them to do so that they  increased time on task available by reading course materials on the bus, in a waiting room, between meetings? And what if more time on task (one of Chickering's seven principles!) means better grades?

Wouldn't that be the right thing to do and doesn't it just feel great doing the right thing? If only our intentions and the right thing to do were more closely aligned. So, if the only thing that has stopped you from creating QR codes for your assignments and readings were knowing HOW to do it, here's the skinny on how:
1) Go to a free QR creator site and enter the URL of the page you want to be the target
2) Add the captured image to whatever locations (syllabus, course Web site) will be handy.
3) Tell your students to search for a free QR Reader app for their smart phone.

You're done. Here's a nice site that walks you through step-by-step:  How to Create a QR Code. Once you're done, go ahead and find out where the QR code above leads you.
Posted by colleen at 12:51 PM No comments:


We're learning more each day about how the world is changing, how HE is changing (or not) and how technology, the Internet, a digital and information age is demanding more of us. For those of you who are passionately following your own profession, and don't have time to track digital world news, here's a few fascinating tidbits from my domain:


The EDUCAUSE Center for Applied Research (ECAR)  Report on Students and Information Technology, 2012 had some interesting findings regarding national move toward student wish and demand for more meaningful technology infused throughout the curriculum:

Less hopeful was the report by the Seattle Times and the National Center for Education Statistics on state rankings in going to college and staying there. Washington State seems to lack the  effort and will to see students to completion in higher education. Turns out that educated people MOVE to Washingion (thank you high tech industry), but we make very little effort to educate our own people for the very careers they could stay in Washington to succeed in. Lots of reasons. Read the report and weep. Then, let's get #FiredUp and do something about it.
Posted by colleen at 8:26 PM No comments: